I don’t have a “Bucket List” per se, although there are things that I would like to get around to doing. One of those things has been to see the Aurora Borealis. This month the Missus and I spent a week in Alaska where we had the chance to do just that at a Northern Lights workshop presented by Beth Ruggiero-York along with Arizona Highways Photography Workshops . There is an element of luck involved in viewing the Northern Lights. The closer to the pole you are the better the chance, and of course it needs to be dark enough to see it, which means winter. The weather needs to be clear, and finally the sun has to cooperate by being active.

Aurora over one of the Yurts (warming huts) at Charlie Dome.

We arrived at Fairbanks in mid snow storm and met up with our group for dinner on Sunday. The forecast was for cloudy skies and snow through Monday, with the weather turning clear and cold Tuesday morning, but despite the clouds we attempted to get to Murphy Dome, an old Air Force radar station in hopes of getting above the cloud layer.  The snow was deep enough that we ended up high centering one of the SUVs on packed snow just short of the top, but we could see it was still clouded in and retreated to the hotel for the evening.  Monday morning after breakfast we met for a nice presentation on aurora science by Neal Brown, a retired scientist who has spent the last 50 years in Alaska.  After the presentation and a discussion on initial camera settings we departed Fairbanks for the Chena Hot Springs Resort where we would be staying for most of the week. It still being cloudy we spent the evening there checking our focus settings and doing test shots at the local air strip.  While it may sound like a lot of effort for a simple thing, it turns out that at -20ºF there are no simple tasks.  The time was well spent. Tuesday evening was clear and we took the 30 minute ride on surplus tracked vehicles up to Charlie Dome for a three hour session.  Coordinated by the resort, there were about 75 or so people up on the dome, many of whom were there to see an aurora, but not necessarily photograph it.  It was a little bit of a concern at first, as a lot of people were using flashlights indiscriminately, but as it turns out the cold caused most of them to retreat to the yurts for hot chocolate.  Over the next few hours the aurora ranged from mild to spectacular. 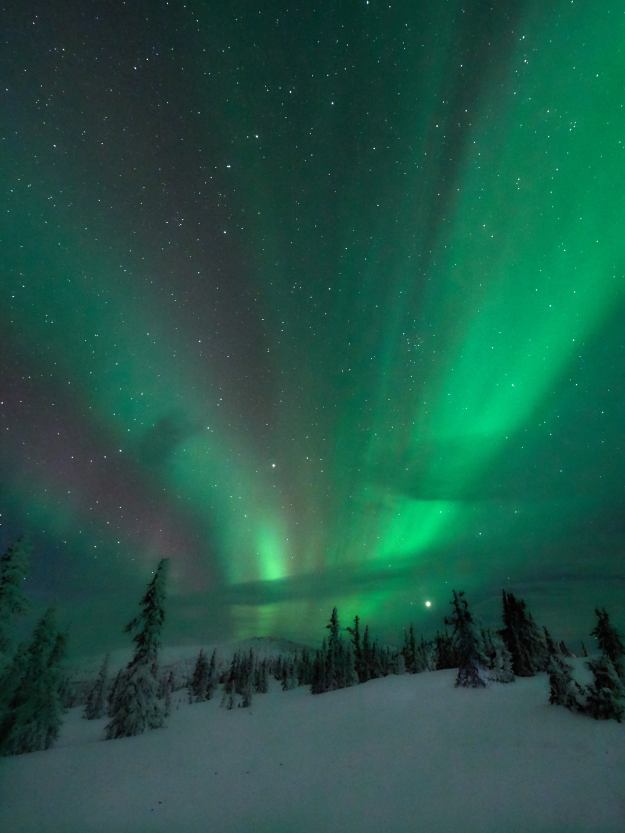 One of the more subdued displays at Charlie Dome. The magenta seemed to be much more visible with the dimmer aurora.

While there were a few learning curve issues in the group (to be covered in a separate post) everyone was relieved that we had a good opportunity still early in the week. Of course, no one would feel confident until downloading the nights shots to see how they came out. It was soon apparent that the time Beth spent verifying focus and her coaching on settings and techniques had paid off nicely. 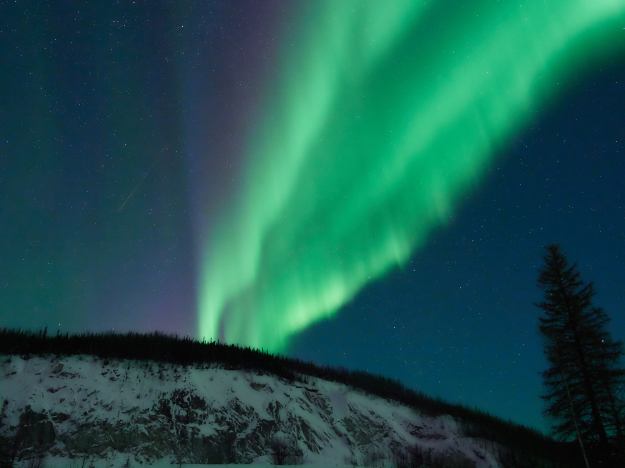 From the Chena River Recreation Area. The faint streak to the left is a sounding rocket climbing to its release point.

The next night we loaded up into the SUV’s and headed to one of the trailheads for the Chena River Recreation Area for the evening’s shoot.  This provided us a quiet area to ourselves with a different landscape to use as a backdrop.  The activity started early, and was intense enough that we were able to see some sounding rockets launched from the Poker Flat Research Range.

The Chena River location probably had the most spectacular displays of the trip, although by the time we decided to call it a night the temperature was -30ºF and we were ready to warm up!  Our final night shoot was back in Fairbanks at an easement for the Alaska Pipeline.  The activity didn’t start as early as the previous night, and was somewhat subdued for a while. Eventually the skies lit up again to provide us with some iconic shots.

My favorite shot for the trip.

It being another -30º night, we wrapped up a little earlier than usual, but with a feeling of accomplishment.  Oddly enough, once everyone got back home and thawed out going back to the Alaskan winter for another chance to shoot the Northern Lights doesn’t seem like a bad idea.

A subtler show to the east.

Next up: So what’s to do in the Alaskan winter?