A city not yet completed

Bright and early Saturday morning I found myself with eleven other photographers at Eric Kim’s workshop “Shooting Urban Landscapes.”  Eric is a high energy guy whose enthusiasm is contagious.  After introductions were complete the next hour or so was spent discussing the work of photographers like Robert Frank, Walker Evans, Lee Friedlander and several others and their approach to Urban Landscapes.  We also discussed some examples Eric had taken both in Dubai and in the US. After giving us some tips on how to compose the shot he gave us a simple assignment consisting of shooting and urban landscape with or without a person, an urban landscape indoors, and an urban landscape with social context.

At this point we went to the Financial district where we received passes allowing us to photograph (not a given in Dubai), split into three groups and went at it.  I started with the indoor assignment.  A few of us spent a little time wandering around to get a feel for what kind of shot might be available.  Being a well decorated business area there was quite a bit in the way of color and furnishing to work with, although the building did feel a bit sterile.  That’s probably more of a reflection on my ability to see the photograph than any fault of the designers!  Still, I managed to come up with a shot in the entrance way I liked.

Moving outside to the mezzanine area I was impressed with how clean and well manicured the area was.  I decided to look for my social context shot.  There was quite a bit of maintenance going on so I tried a shot of some lawn work being done by foreign workers, but while I liked the shot, it was a bit week as commentary.  I changed up a little when I saw a maintenance cart in the middle of a reflecting pool, and I couldn’t resist – it looked like someone was working on the water itself.

In the same area I saw this shot, and while I’m not sure it can really be called a landscape I love the look of it. 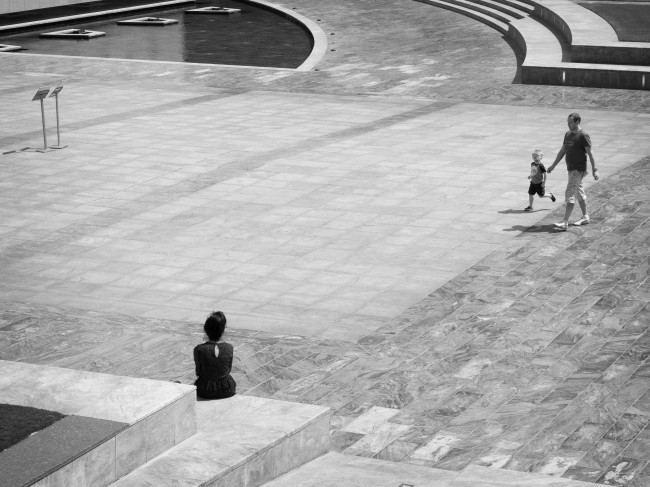 After having lunch at the local Pot Belly’s, we went out on to the street for some more open shots.  I picked the photo at the beginning of the post as my Urban Landscape example, although there were several I liked as well.  Dubai is a very photogenic city.

I liked the contrast between the construction site and the building in the background, here.  Soon, however, it was time to load back up on the bus for the trip back to the Knowledge City.  On our return Eric’s manager Neil Ta gave a presentation on some of his work which provided a contrasting approach to shooting the urban environment.  It was an excellent workshop.

Some more of my shots can be seen at my Flickr site here.