I can’t begin to describe the Shootout, so rather than try you can click on the video above and check out what Sara and Zack had to say about it on their web sites.

END_OF_DOCUMENT_TOKEN_TO_BE_REPLACED

I’ve been following Zack Arias for some time both on his old website and now on DEDPXL.  Done some of his Kelby training courses, got his book, just plain like the guys attitude.  So I was very happy that things worked out for me to take his One Light course.  I’m not a complete newb with flash, but I’m not a pro, either, so this was a good course for me.

END_OF_DOCUMENT_TOKEN_TO_BE_REPLACED

I’m a believer that getting outside your comfort zone is one of the ways to grow. I approached Brooke Shaden’s “Working with Nothing: Building a creative scene in a boring space and in Photoshop” with both anticipation and nervousness.  Fine Art photographers like Brooke are incredibly creative, and while I occasionally come up with something a little original, mostly I assume a “deer in the headlights” look when searching for ideas.  It was my hope that I would pick up some inspiration and ideas from the course, and I was not disappointed.

END_OF_DOCUMENT_TOKEN_TO_BE_REPLACED

Sara shooting an in pool beauty shot in the rain

As I mentioned in my first post in this series, I first heard of Sara Lando by way of her series on taking portraits on Strobist.  In those articles she was witty, insightful, and made lots of really good points.  She’s like that in person, as well.  “Portraiture Intense and Hands On” was a two day workshop covering planning, preparation, communication, shooting and post production for the portrait photographer, whether working with models or capturing images of friends.  First and foremost, Sara believes in making a connection with your subject, finding out who they are and working cooperatively with them to make the image you are trying to capture.

END_OF_DOCUMENT_TOKEN_TO_BE_REPLACED

Since David Nightingale’s class covered post production on Monday afternoon, we had the morning off to relax and wander around a bit.  I had naively brought my Hasselblad in hopes of shooting some film, and here was an opportunity.  For the record, next time I’m not going to bring a film camera since there really isn’t enough time to shoot it with all the other activities.  Still, I did get the shot above from the campus area.

END_OF_DOCUMENT_TOKEN_TO_BE_REPLACED 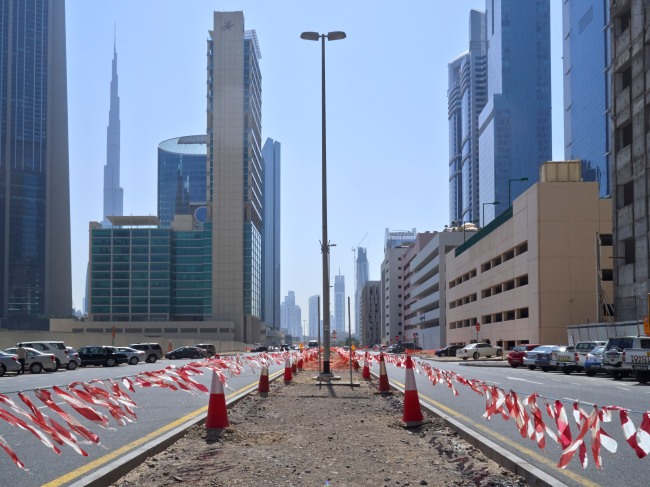 A city not yet completed

Bright and early Saturday morning I found myself with eleven other photographers at Eric Kim’s workshop “Shooting Urban Landscapes.”  Eric is a high energy guy whose enthusiasm is contagious.  After introductions were complete the next hour or so was spent discussing the work of photographers like Robert Frank, Walker Evans, Lee Friedlander and several others and their approach to Urban Landscapes.  We also discussed some examples Eric had taken both in Dubai and in the US. After giving us some tips on how to compose the shot he gave us a simple assignment consisting of shooting and urban landscape with or without a person, an urban landscape indoors, and an urban landscape with social context.

END_OF_DOCUMENT_TOKEN_TO_BE_REPLACED

Surprisingly quickly it was time to grab our gear and start our trip to Dubai.  We left Phoenix around 9:00 am Wednesday and arrived in Dubai about 6 pm Thursday after a brief stop in Washington, DC.  We had considered going to the Gregory Heisler exhibition at GPP’s studio, but by the time we got checked in to the hotel it was late enough that we decided to walk to the convention hall both to stretch out legs and make sure we knew where we needed to go.  In the process we found the food court and grabbed a quick dinner.  That being enough excitement for the evening we retired to the hotel.

Gulf Photo Plus officially opens with Photo Friday – a day of short seminars by the instructors.  Set up in four blocks of an hour an a half each it provides an easy start for the weeks activities, and the opportunity to hear four instructors of your choice.  My selections started with Bobbi Lane’s “Fabulous Faces in Five Steps”  where she demonstrated and discussed a workflow from concept through execution for a portrait session.  This included tips on lighting set up and avoiding common problem areas.  Even though this was a short session, Bobbi covered a surprising amount of material.  I was glad I came prepared to take notes.

Session two was “Illuminating People” by Gregory Heisler.  This was not a technique session, but rather some of the stories behind several of his famous and favorite images.  He discussed the stories behind several of the portraits featured in his “50 Portraits” as well as his philosophy of lighting.  Seeing how he made artificial lighting look like it belonged in the picture was fascinating.  The man has an incredible eye for detail.

After a lunch break we went to Joe McNally’s “A life behind the lens.”  Joe is probably my all time favorite photographer.  It amazes me how he’s worked so long and hard yet you can still see the joy of capturing a picture in him.  His talk covered everything from his early flash work through stories he’s done, and most interesting to me stories he refused to do.

Finally we wrapped up with Linday Adler’s “How to Flatter Anyone, Really, Anyone.” which was another practical session for portrait photography.  Lindsay started with basics of lens choice, angles, lighting, poses. hair & make up, clothing and retouching and proceeded to go into detail, providing samples of problem areas and how best to deal with them.  This was another seminar that I left with pages of useful notes.

Photo Friday was not only fun and informative, it gave me a chance to hear some of the photographers whose workshops I would not be taking this year.

Next up – The workshops begin!

As a reader of David Hobby’s Strobist site I became familiar with the annual Gulf Photo Plus event held in Dubai each March primarily from the descriptions and videos of the “Shootout” with which they close each year.  Last January he made a compelling argument to attend in his Five Reasons to Go to Dubai for Gulf Photo Plus 2013 post.  Unfortunately, two months wasn’t going to be enough time for me to get everything together so I started planning on GPP 2014.  As it turns out, having a year to prepare worked out quite nicely.