I’m a believer that getting outside your comfort zone is one of the ways to grow. I approached Brooke Shaden’s “Working with Nothing: Building a creative scene in a boring space and in Photoshop” with both anticipation and nervousness.  Fine Art photographers like Brooke are incredibly creative, and while I occasionally come up with something a little original, mostly I assume a “deer in the headlights” look when searching for ideas.  It was my hope that I would pick up some inspiration and ideas from the course, and I was not disappointed.

We started with Brooke describing how she began working in an apartment making self portraits and finding and using props to create a world from her imagination.  She showed us several images and how they were built and I was amazed at the simplicity of the concept and the sophistication of the execution.  As the discussion continued she gave us a few simple guidelines: pick a prop and make a story around it and don’t use a prop unless it adds to the story.  She gave us some exercises in building stories, first from a single prop, then from a combination of three unrelated words.  Using her approach I suddenly found I could create stories, I had just been going about it the wrong way.  A major step forward for me.

Brooke then divided us into two groups and had each group select a costume for their model and a single prop, develop a story and shoot it.  Our group picked a swath of fabric, flowers, and decided on a story of a girl experiencing a melancholy loss.

Interestingly enough this shot kind of developed on its own into something of a Madonna image (religious icon, not pop star.)

After working for a while on this set, the groups traded and we now had a model in a flowing dress with butterflies and leaves.  We decided she was a butterfly being reborn and worked with that idea.  My personal goal for this course was to learn how to make an  environment for portraits so I tried to shoot from that perspective.  Some of the more talented people in the workshop were doing incredible fantasy worlds from their captures, but alas, that’s not me… 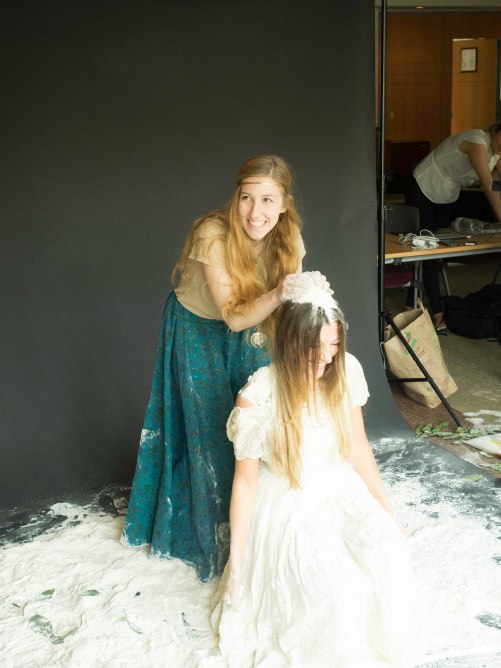 Brooke having way too much fun…

In the afternoon Brooke built a snow scape using flour, and showed us how to turn flour and confetti into a snow storm.  Rather than trying to describe it, you can see a demonstration on her blog “Promoting Passion.”  We also played with using flour to create a smoke or mist effect.  Fun, messy, and the poor model is probably still trying to get the it out of her hair!  A sensor cleaning was definitely in order.  (Tip from Brooke: Baby powder, while more expensive, doesn’t turn into dough when you try to wash it out of your hair.)

Next up – One Light

1 thought on “Innocents Abroad part 7 – Working with Nothing”